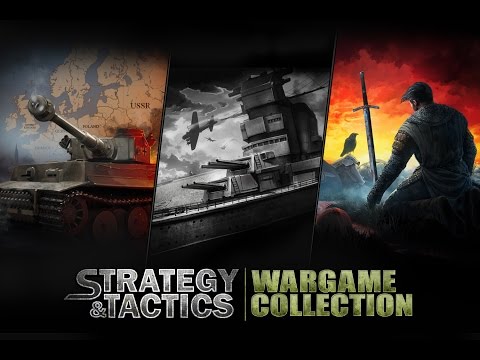 DigiCorp information about the seller and his items
onlineAsk a question

Strategy & Tactics: Wargame Collection is a collection of three historical turn-based strategies in which you will lead the armies in the major wars of the Middle Ages, and also take control of the state and nation during the Second World War.

"Strategy and Tactics: The Great Patriotic War" - become a general in the most important battles of the Second World War.
Having assumed command over the armies of Germany, the USSR and the Allies, you will lead them to victory in three difficult plot campaigns.
Single scenario battle will suit both amateurs for several hours tinkering on one huge map, and fans of quick fights.

This addition of "Strategy & Tactics: Wargame Collection" is inspired by the heroic spirit of the Viking Age. Once these fierce warriors were horrifying throughout Europe! The wind fills the sails over the Drakkars - it´s time to burn swords to the glory of the northern gods! In addition to a large story campaign dedicated to the exploits of the Vikings, you will find many single scenarios. Cover your name with unfading glory in the legendary Battle of Brovall, unite the lands of Norway, conquer England, and then devastate the Christian kingdoms of Europe! Become the leader of the furious raids of the Danes or Pechenegs - or defend your frontiers under the banners of England, France, the Holy Roman Empire or Russia.

The cannonades of the Second World War receded. A bloody conflict ended in the establishment of a fragile balance of power between the two superpower-winners. However, this state of affairs does not suit either Moscow or Washington. Twilight is gathering ... USSR vs USA is a full add-on to Strategy & Tactics: Wargame Collection, which will be a great gift for all fans of alternative history. How would history develop, grow into a "cold war" in a global conflict? In the spring of 1948, Beijing underwent a nuclear attack. The next day, the Soviet Union and China begin a large-scale invasion of North America; providing fierce resistance to the invaders, the troops of the United States and Canada slowly retreat into the interior of the continent ... The Flame of the Third World suddenly flares up on all continents of the Earth! Take one side of the conflict in alternative historical campaigns and scenarios. A separate surprise awaits fans of conspiracy theories on the shores of Antarctica, where in the darkness of the polar night the last army of the Third Reich secretly prepares for revenge ... What is this - insanity or a terrible future reflected in the past? Fight and win the war, which was never meant to begin!

The product does not have regional restrictions.

Activation.
* Install the Steam Client - http://steampowered.com/download/SteamInstall.msi (if not installed).
* Log into your Steam account or create a new one.
* In the Steam client, we look for the bookmark "games" => "Activate via Steam".
* Enter the product´s digital key to activate it.

Your positive feedback contributes to the expansion of our products.
Current list of products http://www.plati.market/asp/seller.asp?id_s=139281